What the Pentagon Says About the 3M Earplug Lawsuit

Hearing loss is not an evitable cost of war. For the Pentagon prevention of hearing loss is critical, as noise exposure is inevitable due to the nature of the profession, and hearing is a vital asset during combat or training. The 3M Earplug Lawsuit was filed under the whistleblower (qui tam) provisions of the False Claims Act, and the company settled for $9.1 million to resolve allegations without admitting liability.

Hearing loss and tinnitus, including loss of balance, is the most common military injury in combat veterans, and unfortunately, it is often the unseen damage or injuries that gets the least attention but creates the most problems for military staff or veterans.

What is the 3M Earplug Lawsuit?

They claimed their earplugs would protect the ears of military personnel from noise pollution above 85 decibels while allowing them to hear voices. This includes typical combat noise such as military vehicles and other operational noise, loud explosions, and close-range firearms.

The earplugs were standard-issued equipment for soldiers serving between 2002 and 2015, in Afghanistan and Iraq, and most military bases.

In a highly publicized case, under qui tam (whistle-blower) provisions of the False Claims Act, the United States Military alleged 3M knew the CAEv2 earplugs were defective and did not meet the military standards. It was alleged that both companies were aware of the design flaws, defects, and failed tests.

In particular, they alleged that the earplugs were:

It was claimed that Aero Technologies, Inc. tested the earplugs in early 2000 and it showed a zero-noise reduction rate (NRR), which means it offered no protection against noise that can damage hearing and cause tinnitus. Despite these failed tests 3M claimed it met military standards.

Why is Hearing Loss Protection Critical in the Military?

Hearing Loss is the Number One Service-oriented disability in post-combat personnel; however, most people would suspect it to be lost limbs or traumatic brain injuries, or even Post Traumatic Stress Syndrome (PTSD) as these are the cases that are publicized.

Noise pollution is a recognized occupational hazard in the military; most personnel are exposed to some form of prolonged noise pollution at some stage, whether you are on active duty, in combat zones, or working in noisy environments amongst military equipment.

Exposure length and type will vary – some are exposed to constant noise pollution over an extended period. For others, while in active combat or training exercises, it will be the ongoing noise generated by military vehicles as well as regular gunfire, booming, and extremely loud noises.

The CDC estimates that military veterans have a 30% higher chance of hearing problems.

Current service personnel records show that 10-18% have been diagnosed with significant threshold shifts in their hearing despite efforts to improve military hearing conservation programs (HCPs).

The CDC estimates that military veterans have a 30% higher chance of hearing problems than non-veterans, and despite efforts to improve military hearing conservation programs (HCPs) 10-18% of Service personnel have been diagnosed with significant threshold shifts in their hearing.

The biggest problem with noise pollution injuries and damage is the fact that it is often not reported and thus not treated, as it cannot be ‘seen’ as you would for example in a loss of limb. The effects of noise pollution are pervasive, persistent, and numerous. It is medically and socially significant.

There is the perception or sensation of sound or ringing in the ears where no external sound is present. Tinnitus is not a condition, but a symptom of an underlying condition such as hearing injury or loss and often gets worse with age.

Short or long-term exposure to loud and booming noises can cause permanent damage to the inner ear hair cells. These move in relation to the pressure of soundwaves and will then trigger electrical impulses to your auditory nerve, which the brain then interprets as sounds.

The phantom sounds are heard in one, or both ears will come and go. Sometimes it is so loud and pervasive that it will interfere with your ability to hear an actual sound or to concentrate. It may include ringing, buzzing, clicking, humming, roaring, and hissing, which may vary in pitch.

A blow to the head, chronic and prolonged exposure to loud noises, or sudden bursts of noise at high decibels, can cause permanent damage to normal hearing. Hearing impairment is typically defined as an increase in the threshold of hearing, according to the WHO (World Health Organization), and is assessed by threshold audiometry.
Threshold tests are compared to a baseline test in occupational settings.

Hearing loss is defined as

Any patient with combat-related head trauma must be evaluated for possible blast-related comorbidities, including speech or language problems, dizziness and imbalance, and PTSD.

A very high instantaneous sound pressure level or a blow to the head can cause severe mechanical damage to the ear:

What Causes Tinnitus and Hearing Loss in the Military

Exposure to noise is inevitable in the military due to the nature of the profession. Prevention of hearing loss is key, as hearing is a vital asset in all military operations, be it tactical and survival training or actual combat.

The constant exposure to high levels of noise, often for extended periods, makes adequate prevention paramount. Combat can increase the risk of hearing loss six-fold, or 63%, according to an NIH study.

Earplugs are the centerpiece to the prevention strategy and should always be used when exposed to noise levels above 85 decibels.

Effective earplugs can reduce noise levels by 30 plus decibels. This is very much dependant on the length of exposure as every 3-decibel increase in loud noises halves the time one can be exposed to the noise without damage

Consider the steady background noises of a Black Hawk helicopter at 106 decibels or a Bradley Fighting Vehicle 130 decibels compared to a grenade at 160 decibels or an AT4 antitank weapon which booms for a second at 187 decibels.

Military personnel have little option but to remain at their posts despite the constant barrage of noise above safe levels. 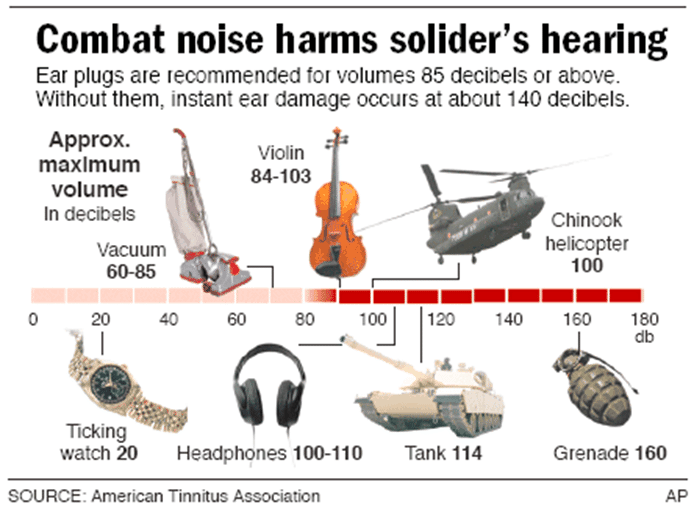 Wells et al. defined the risk of hearing loss among US Military members in relation to their deployment experiences, in a study published in Noise & Health. Data from the Millennium Cohort Study and Objective Military Service Data was used to assess exposures and outcomes.

The main findings include that:

The study recommended that prevention should include early detection and monitoring.

Impact of Noise on Hearing in the Military

The sources of noise in the military, pathophysiology, and management of patients with noise-induced hearing loss were evaluated in a study published in Mil Med Res in 2015. The results of this study highlight the staggering risks military personnel face daily, mandating the use of impeccable prevention methods.

Sources vary with designations, with the strongest determinants of hearing loss being:

According to the OSHA 2014 Standards permissible noise exposure in the workplace, measured in duration per day (hours) based on sound level (dBA), ranges from:

Peak Sound Pressure Level for different weapons are all much higher:

The highest indoor noise levels were found in the engine rooms:

The Pentagon and the 3M Hearing Lawsuit

Frank Robey, Director of the US Army Criminal Investigation Command’s Major Procurement Fraud Unit, announced that 3M Company, headquartered in St. Paul, Minnesota, had agreed to pay $9.1 million to resolve allegations that they have knowingly sold defective earplugs, in a press release issued by the Department of Justice in July 2018. The 3M Company, however, did not admit liability.

“Today’s settlement will ensure that those who do business with the government know that their actions will not go unnoticed,” said Robey. “Properly made safety equipment, for use by our soldiers, is vital to our military’s readiness. Our agents will respond robustly to protect the safety of our military.”

“Companies who knowingly hide important information regarding the impact of their products should be held responsible,” according to one of the top personal injury lawyers in Michigan, Eileen Kroll.

The lawsuit was brought under the qui tam (whistleblower) provisions of the False Claims Act. The Federal Act, also known as the Lincoln Law, and several parallel state false claim acts, allows citizens to sue companies on behalf of the government if they have proof of fraud, and to participate in the settlement or award. It is a civil anti-fraud statute designed to allow monetary recovery for the government when defrauded by contractors and to punish those that perpetrate fraud. It is recognized by Congress as a pervasive, expanding and severe national problem.

The main elements of a false claim under the FCA – the claim must be:

The military’s case is captioned United States ex rel. Moldex-Metric v. 3M Company, Case No. 3:16-cv-1533-MBS (D.S.C.) but is generally referred to as the 3M Hearing Lawsuit. The settlement was the result of a coordinated effort between several government and military organizations, namely the Army Criminal Investigation Command, the Defense Criminal Investigative Service, The Civil Division of the Department of Justice and the United States Attorney’s Office for the District of South Carolina. All the departments strongly condemned any party that supplies substandard products, in particular to military personnel and stated that they would vigorously defend the military against fraud, waste, and abuse.

Protect Yourself and Your Rights

Hundreds of veterans have filed suit in the 3M Hearing Lawsuit, and you may qualify if you meet the following criteria:

Don’t forget about the statutes of limitation If you are a military veteran who lives in Michigan, and you have suffered hearing loss or other noise pollution damage, call Eileen Kroll, a nurse and personal injury trial attorney, at Cochran, Kroll & Associates, at 1-866-MICH-LAW (1-866-642-4529) or fill in the form on our website for a call-back and free case evaluation consultation.

Nikole Parsons
Nikole has a special interest in medical-legal issues and holds post-basic degrees in medical law and business. She has developed quality improvement and safety plans for many practices and facilities to prevent medical-legal issues and teaches several courses on data protection and privacy, legal, medical examinations and documentation, and professional ethics. She has been writing professionally on legal, business, ethics, patient advocacy, research and medico-legal issues in articles, white papers, business plans, and training courses for over thirty-five years.
« What is Considered Nursing Home Negligence?
What Do I Do If My Social Security Claim is Denied? »