Contact Cochran, Kroll & Associates P.C. is no longer accepting new cases for 3M Earplug Lawsuits. If you have any other questions about our other legal practice services please call us toll-free at 1-866-466-9912 to begin to receive a free case evaluation. Remember, you don’t pay a dime unless we win compensation for you. We’re here to help you seek justice!

A recent settlement in the 3M Earplug Lawsuit in favor of the United States military has once again highlighted the importance of hearing protection when working in noisy environments.

What was the 3M Earplug Lawsuit about?

In this highly publicized case under qui tam (whistle-blower) provisions of the False Claims Act, 3M and its predecessor, Aearo Technologies, Inc., had supplied the U.S. Military dual-ended Combat Arms Earplugs, version 2 (CAEv2), which were standard-issued equipment for Afghanistan and Iraq soldiers serving between 2003 and 2015.

In July 2018, the Frank Robey, Director of the U.S. Army Criminal Investigation Command’s Major Procurement Fraud Unit, in a press release issued by the Department of Justice, announced that 3M Company had agreed to pay $9.1 million to resolve allegations, however, did not admit liability.

Why is Hearing Loss Protection Critical in Military Service?

One would expect Post Traumatic Stress Syndrome (PTSD), lost limbs or traumatic brain injuries in post-combat personnel; however, you may be surprised to find that Hearing Loss is the Number One Service-oriented disability.

Noise pollution is a common factor in the military, whether you are on active duty, in combat zones, or working in noisy environments amongst military equipment. Nearly 3 million veterans receive disability benefits for hearing loss and tinnitus (ringing in ears), according to the U.S. Department of Veteran Affairs (VA).

The CDC estimates that military veterans have a 30% higher chance of hearing problems than non-veterans, and despite efforts to improve military hearing conservation programs (HCPs) 10-18% of service personnel have been diagnosed with significant threshold shifts in their hearing.

Causes of Tinnitus and Hearing Loss in the Military

Hearing is a vital asset during tactical and survival training and combat, however, due to the nature of the profession, exposure to noise is inevitable, and prevention of hearing loss is key.

Military personnel are constantly exposed to high levels of noise, often for extended periods and combat can increase the risk six-fold, or 63%, according to an NIH study.

Earplugs should be used above 85 decibels, and, in general, can reduce noise levels by 30 plus decibels, but every 3-decibel increase in loud noises cuts the amount of time one can be exposed to the noise without damage, in half.

Earplugs assist with steady background noises such as that of a Black Hawk helicopter (106 decibels) or a Bradley Fighting Vehicle (130 decibels). An AT4 anti-tank weapon booms at 187 decibels, for a second only. 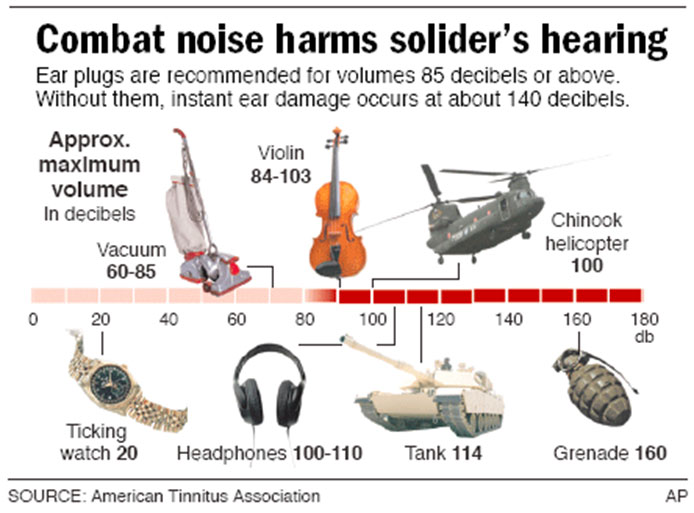 Hearing injuries and noise-induced injuries can have devastating long-term effects such as permanent hearing loss, and because of their lower visibility, they often go unreported and be the hardest to deal with.

Service members suffering from tinnitus may hear a buzzing, hissing, or ringing noise in their ears that never lets up. This affects their ability to relax, concentrate, and even sleep.

Hearing loss affects all aspects of life such as type of employment, family and social relationships and can lead to depression, isolation, and even eventual cognitive decline.

Treatment of patients with combat-related head trauma must include possible blast-related comorbidities including dizziness and imbalance, speech or language problems, and PTSD.

If you are a military veteran who lives in Michigan, and you have suffered hearing loss due to defective 3m combat arms earplugs issued by the department of defense, contact Eileen Kroll at Cochran, Kroll, & Associates, P.C. at 866-MICH-LAW for a no-obligation consultation. Eileen is a registered nurse and a top personal injury lawyer in Michigan. Our law firm never charges a fee unless a recovery is made.

Disclaimer : The information provided is general and not for legal advice. The blogs are not intended to provide legal counsel and no attorney-client relationship is created nor intended.

Julianna Barry
Ms. Barry is studying Communications at the University of Pennsylvania. She has won multiple awards both for her persuasive and creative writing and has written extensively on the topics of medical malpractice law, personal and birth injury law, product liability law. When she’s not researching and writing about these topics, she edits a literary magazine and tutors students at Penn’s writing center.
« Hearing Loss and Military Regulations: How to File a Claim
Birth Injury Lawyer for a Delayed Emergency C-Section »