The Opioid Crisis and Medical Malpractice

The leading cause of injury death in the United States is drug overdose – in the last 20 years more than ten times the number of people that died in the Vietnam war, have died in drug overdoses related to opioids.

As the Opioid Addiction Crisis is spiralling out of control, thousands of cases are filed against multiple manufacturers by loved ones, overburdened states and illicit drug rings tracked down. The complexity of the crisis requires the input of a lawyer specialized in medical malpractice to sort out who to sue for your losses.

What is an opioid?

An opioid is a very strong pain medication that acts on the nervous system. It is a drug resembling opium in addictive properties. Some prescription opioids are made directly from the poppy plant, and others are made from synthetic compounds.

Opioids can be prescribed for pain relief but are very addictive, and often, people will resort to buying illegal opioids such as heroin, which is an extremely dangerous drug. Pill-mills have been found to lace fake opioid medications with fentanyl, which is even stronger than heroin.

How does an opioid act on the brain?

There are special opioid receptors in many areas of the brain involved in feelings of pleasure and pain – the opioid binds with these receptors and activate them to block pain signals and at the same release large amounts of dopamine (pleasure hormone). These receptors are also found in the spinal cord and other organs.

The rush of dopamine reinforces the good feeling of taking the opioid and thus starts the addiction cycle of wanting to take more and feel good more often.

What are the effects caused by taking an opioid?

Taking an opioid relieves pain in the short term, and makes the patient feel relaxed and happy. Harmful effects include drowsiness, euphoria, confusion and slow breathing. In some cases, the patient may experience nausea or constipation.

Misuse of the drug slows down the breathing to the point of hypoxia, where the brain is deprived of enough oxygen. This causes short-term and long-term negative brain effects and seriously damages psychological functioning. If too much is taken in too short a period, it can lead to coma, permanent brain damage or have fatal consequences.

It is particularly dangerous when prescribed to older, chronic or confused patients, as it is easy to overdose when taking a large number of medications. A large number of drugs also increase the risk of interactions. A slow metabolism negatively impacts the breakdown of the drug’s components in the system, which can also lead to an accidental overdose.

Opioid use during pregnancy often leads to miscarriage and low birth weight or neonatal abstinence syndrome, where the baby is born with an opioid addiction and suffers withdrawal symptoms.

Sharing drug equipment and products obviously may lead to other infections such as hepatitis or HIV.

Several slang terms are used to describe opioids, such as Oxy, Vikes and Percs.

What are the effects of long-term use of prescription opioids?

Long-term use of prescription opioids can lead to the following conditions:

Withdrawal symptoms are extremely uncomfortable and painful, which makes it difficult to stop the abuse of opioids. Naloxone can be administered in the case of overdose, and in November 2017 the FDA approved a small nerve stimulation device called NSS-2 Bridge to assist with withdrawal.

Fatal drug overdoses have tripled in the last two decades, and cause 115 deaths a day, nearly half of them from prescription opioids. The rate of prescriptions has increased dramatically (three times as high as two decades ago), while the number of people reporting pain has remained stable at around 11%. 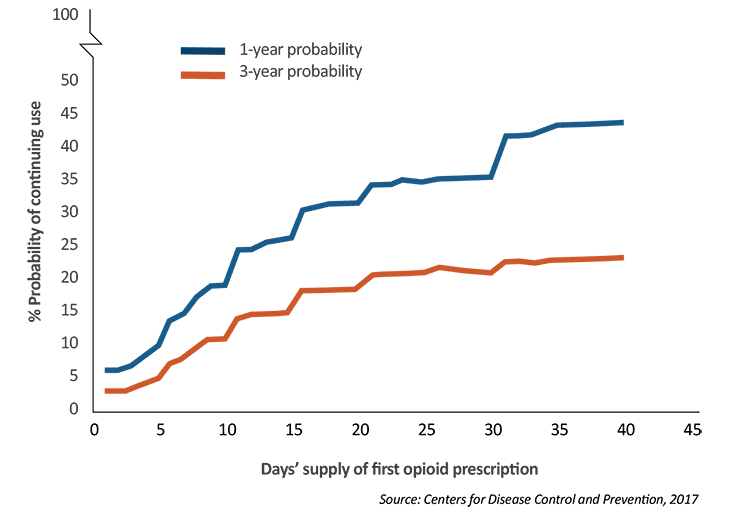 What are the implications for public health?

The Opioid Misuse Crisis is decimating public health programs in some states, including Michigan, and services are straining to assist with the crisis. Law-enforcement is overburdened, and even libraries are complaining about having to deal with drug-addicts seeking free and open warm spaces.

In Western Massachusetts where they are experiencing a dramatic spike in fatal opioid overdoses, men with substance abuse problems, that have not committed any crimes, are sent to prison where a special wing has been designated for court-ordered addiction treatment. All demographic groups are affected by this crisis, and it is now rapidly increasing in African Americans.

Issues contributing to the crisis include:

Many researchers have investigated the crisis and proposed the following steps:

History of the Opioid Misuse Crisis

According to the CDC, more than 400,000 people have died from opioid related overdoses in the last two decades, which came in three waves:

The CDC developed the Prevention for States and Data-driven Prevention Initiative, as well as the Enhanced State Opioid Overdose Surveillance program. However, a collaborative program including all medical personnel, public health, organizations at the local community level and the communities are required to tackle this program, including law enforcement and judicial communities.

The NIH launched the National Pain Strategy and concurred with the overarching programs outlined above, working with the Interagency Pain Research Coordinating Committee and the National Institutes of Health’s Pain Consortium as well as the private sector.

Where does the law stand on the opioid crisis?

The Opioid Misuse Crisis was declared a “Public Health Emergency” in October 2017 by President Trump and the HHS Office for Civil Rights, and a package of bills aimed at fighting the crisis was signed.

Several Ivy League Law Schools have become involved in solving the crisis – looking at it from many perspectives such as public health, mental health, social justice and race, insurance law and economics. Many are questioning the ethics and legal consequences of continued opioid prescriptions in the light of the crisis, and are looking into criminal, civil, policy and regulatory solutions.

Following the recommendations of the CDS on opioid prescriptions for pain management, many states have implemented new laws and regulations regarding prescribing practices.

Washington state legislated rules with regard to chronic pain management as early as 2010, and cut down on volumes following the CDC guidelines, which prompted the shut-down of 8 Seattle Pain Management Centers; however, Massachusetts passed the first law in 2016, setting a 7-day limit on first-time prescriptions of opioids.

Hundreds of bills relating to opioid use have been considered in the last few years, and by the end of 2018, at 33 of the states have passed legislation with limits, requirements or guidance for prescribing opioids. Limits vary between 3, 5, 7 and 14 days and some have set dosage limits in MME’s (morphine milligram equivalents).

Most of the laws apply to acute pain management, and exempt substance abuse care, chronic or cancer pain management and palliative care. Several have explicit rules for prescribing to minors. 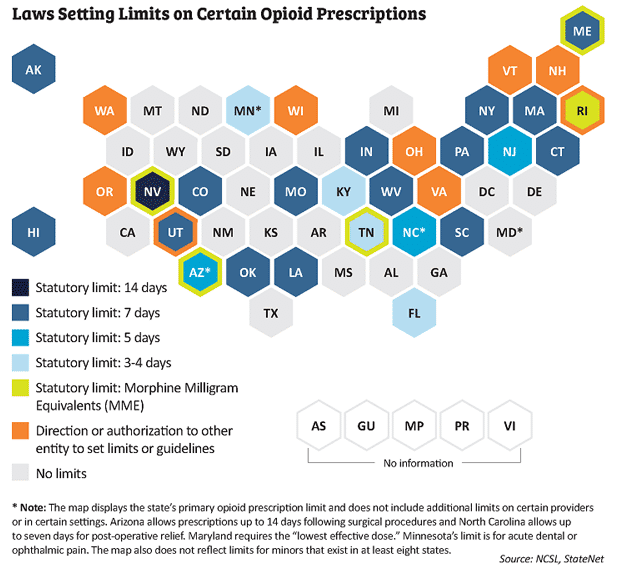 Many have enacted laws providing immunity for carrying and administering Naloxone (an antidote used in overdoses) and provide stock to law enforcement and first responders as well as chronic or palliative care patients.

In a landmark ruling in the first case to go to trial, amongst thousands of cases brought against drug manufacturers by cities and states, the judge ordered Johnson & Johnson to pay $572 million in damages in Oklahoma on August 26, 2019. Oklahoma State sued for $17.5 billion, claiming they fueled the opioid crisis that claimed more than 6,000 lives in the state.The case was brought by the Oklahoma Attorney General Mike Hunter.

Judge Balkman said it is clear the company deceptively marketed their painkillers and helped to foster a crisis, via their subsidiary Janssen, that led to increased rates of addiction, neonatal abstinence syndrome and overdose deaths. He said they contributed to a ‘public nuisance’ in the deceptive marketing of highly addictive drugs. His ruling includes that the company will fund an ‘abatement plan’ for care for addicts, families and communities.

It is the first time that a pharmaceutical company is being held liable for the worst drug epidemic in American history. The company announced that it would appeal the decision.

The AHLA (American Health Lawyers Association) reported that several newspapers claimed on the 27th of August 2019 that the Slacker Family that owns Purdue Pharma, has been blamed for the bulk of the opioid crisis are ready to propose a settlement against thousands of Medical Malpractice lawsuits against the company and family members.

It is alleged that the Slackers will relinquish ownership of the company and pay at least $3 billion of their own money to settle suits, which could total $12 billion. If this happens, they will be the first company amongst two dozen or more pharmaceutical manufacturers, distributors and retailers being sued.

First reported by NBC, U.S. District Judge Dan Aaron Polster, who oversees the consolidated federal lawsuit or over 2,000 plaintiffs, apparently said that the leaders are considering the offer. It is reported that the company would declare bankruptcy and become a public benefit trust company, with all its profits going to the governments that filed lawsuits.

However, it is also claimed that Purdue already settled a lawsuit in Kentucky for $24 million related to claims against their marketing of OxyContin and tried to keep the records sealed.

Bloomberg reported that the J&J settlement that the bear case scenario of $150 billion in damages predicted by an analyst is coming closer to fruition. A Berenberg analyst, Patrick Trucchio renewed his April projection for liabilities for $150 billion, including more than 45 states and 2,000 localities seeking a settlement of $100 billion.

In 2017 there were more deaths in Michigan from drug overdoses than car accidents, according to the Michigan government’s opioid epidemic by the numbers pages. With 11.4 million opioid prescriptions written in 2015, that equates to 115 prescriptions per 100 people, and a 17x increase of overdose deaths.

With these staggering numbers it is surprising that the state has no specific laws restricting the prescription of opioids; however, they do provide prescription guidelines and updated monitoring systems and naloxone standing orders, in addition to a Drug Abuse Hotline and information on treatment centers.

Sadly, a University of Michigan analysis showed that nearly one-third of Michigan counties have no opioid-addiction medication-based treatment services and substantial barriers to access exists across the state, forcing the burden of the crisis onto the cities, counties and state:

In another study, 24 of Michigan’s 83 counties were considered High Risk (for high mortality), the highest ratio in the country.

If you, a family member or friend are struggling with opioid addiction, get assistance urgently, and if you have suffered a loss due to this crisis, consult an attorney at Cochran, Kroll & Associates, P.C. for a complimentary case evaluation to discuss medical malpractice claims brought on by opioids. We never charge a fee unless we resolve your case.

Eileen Kroll, a registered nurse and personal injury trial attorney, at Cochran, Kroll & Associates, P.C. can assist you with managing the complexities of a medical malpractice suit in Michigan. Call Eileen or any member of our legal team at 1-866-MICH-LAW (1-866-642-4529).

Nikole Parsons
Nikole has a special interest in medical-legal issues and holds post-basic degrees in medical law and business. She has developed quality improvement and safety plans for many practices and facilities to prevent medical-legal issues and teaches several courses on data protection and privacy, legal, medical examinations and documentation, and professional ethics. She has been writing professionally on legal, business, ethics, patient advocacy, research and medico-legal issues in articles, white papers, business plans, and training courses for over thirty-five years.
« Is Sedation Dentistry Risky?
IVC Filter Lawsuit National Settlement Amounts »

There is no obligation for a case evaluation & no fee is charged unless a recovery is made.
Your privacy is important to us. Cochran, Kroll & Associates, P.C. does not share, sell, rent, or trade personally identifiable or confidential information with third parties for any purpose.
Scroll